3.7K shares
Jump to Recipe Print Recipe
When we lived in California last year, we had some really great friends that introduced us to Chicken Tikka Masala. For this reason, we will forever be in their debt. 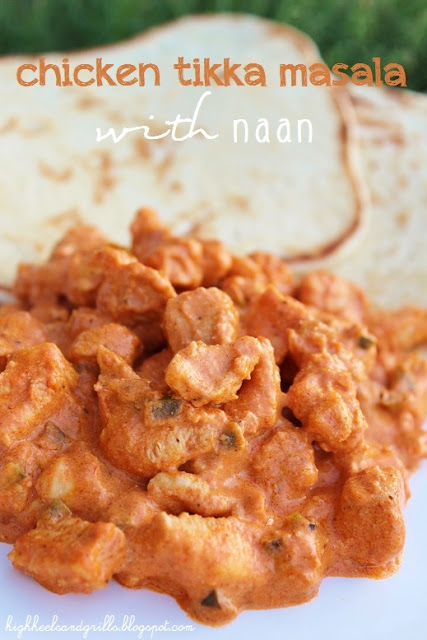 Please, don’t knock this until you’ve tried it. I had never eaten Indian food before, but I am a through and through fan now! I really wish I could just give you a bite of this through your screen because it is really that good. Every time we have it (which is probably way too often), I find myself stuffing my face to the max, not just because I’m hungry, but because I can’t get enough of the taste! I will warn you that this recipe is not for the faint in heart. It takes a little bit of time, but it is well worth the reward. This might make you tempted to cut corners and not make the naan (a garlic flatbread) that goes with this meal, but don’t do it! The naan is a vital part of the deliciousness that makes all of this up! (The Chicken Tikka Masala recipe was found at Allrecipes.com and the Naan recipe was also.) 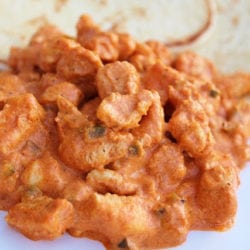 This Chicken Tikka Masala with Naan Bread is better than any restaurant Tikka Masala out there! It is a little time consuming, but so worth it. If you are new to Indian food, this is the one to try!

NAAN: While chicken is marinating, in a large bowl, dissolve yeast in warm water - let stand about 5 minutes until is starts to bloom.

SAUCE: In a large frying pan, pour in the marinated chicken (marinade and all) and cook until no longer pink inside - transfer to strainer, but do not rinse.

NAAN: After the second rising, preheat griddle to medium-high heat.

It is best served by using the naan to scoop up the Chicken Tikka Masala. The cool thing about this naan is that you can also use it for flatbread sandwiches or…whatever else you use flatbread for. This recipe may sound a bit confusing, but give it a try and it will all come together. If you have any questions, feel free to ask!

Your information will *never* be shared or sold to a 3rd party.
3690 shares