2.1K shares
I don’t know how you do it in your house, but in our house, I’m the money manager. Obviously, I don’t make any big purchases without talking it over with Zachary first, but I’m the one that pays the bills and reconciles the budget. And to be completely honest? I love it. I get giddy when payday rolls around. Not because we are getting money {which is totally great too}, but because I get to figure out our budget and tell our money where to go.
In the last three years that we have been married, we’ve been able to pay off almost $30,000 in debt. 30,000!! That is so much money! In just 19 days, we will make our last payment on a loan that Zach took out when he entered active duty into the Air Force. To say I’m excited would be an understatement. I can’t freaking wait!! Don’t ask me how we’ve done it, because I’m not entirely sure. I remember two weeks after we got married and we were going over our finances together, all we had in our bank account was $800 from my apartment contract that I sold and about $1500 from my car that I sold as well. I had never had more than $600 of debt in my entire life and then $30,000 was plopped onto me outta nowhere. I don’t say that to put blame on Zach or anything because once we were married, his debt became my debt and I didn’t even think twice about it. As I was browsing a friend’s blog one day, she mentioned Dave Ramsey and his book about paying off debt. I haven’t ever read his books, but she mentioned that he recommends making the minimum payments on all of your debts, except for your smallest one. For that one, you scrimp and save and put every last extra penny that you can into paying it off. As soon as that happens, you take whatever money you were putting towards it and use it to pay off your next smallest debt. That, plus the minimum payments you were making, will result in what is called the ‘snowball effect’ and is an awesome method at getting debt paid off quick. I remember reading that and being so excited to be debt free one day because dang. When people say that paying off debt is liberating, they weren’t kidding. We’ve paid off a few things here and there that have contributed to the overall $30,000, but it’s nothing like this loan we are getting ready to be rid of. April 2nd can’t come fast enough!
Anyway, it probably seems silly that I’m talking about debt, when what you really came here for is a recipe for BBQ Chicken Pizza, right? I promise it all ties in! Just because we’ve been able to pay off so much money, doesn’t mean that I’m always the best money manager. In fact, a lot of times we get a week into our budget and I realize that we have already spent almost all of our grocery budget. Oops. So that’s when I try to make do with what’s in the pantry. Do you want to know our go-to recipe for times like this? That’s right. Pizza. Because it’s always delicious and cheap. Dang cheap. We always have the ingredients for the dough on hand, then it’s just a matter of what toppings to put on. We have always loved Margherita Pizza and we make it frequently, even if we aren’t running low at the end of our budget, but our newest obsession has become this BBQ Chicken Pizza. I like to make a batch of the BBQ Chicken and then alternate between eating it on sandwiches and pizza. It lasts forever for us and if need be, it freezes really well! If you’re really low on your budget, alfredo can be made for pretty cheap and tastes great with just cheese! 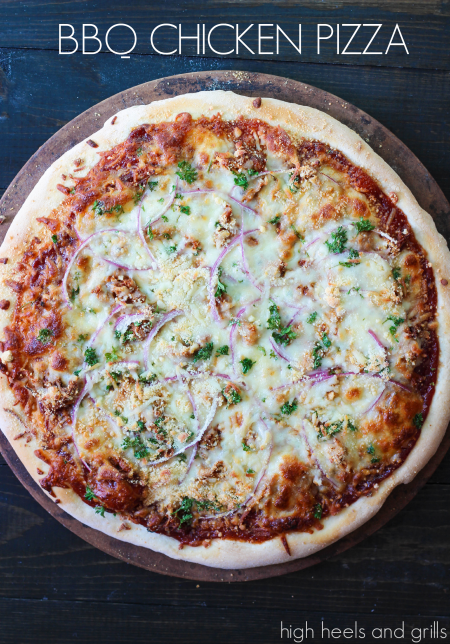 There you have it – the secrets of the High Heels and Grills household. I hope it comes in handy for ya!

High Heels & Grills is our attempt to discover and even create our fantastic food favorites and share them with you. READ MORE
See More →
Follow on Instagram
This error message is only visible to WordPress admins

Your information will *never* be shared or sold to a 3rd party.
2145 shares