989 shares
Zach and I didn’t have a huge, extravagant honeymoon. We were told that he would be entering active duty into the Air Force exactly one week after we got married {Which they later told us on our wedding day that we had another month and a half. Lame.}, so between needing to pack and prepare for a 36 drive to Montgomery, AL, we decided to keep things pretty low key by staying in Salt Lake City for a few days. Some people might think that’s lame, but even though I had been to SLC more times than I could count, it still felt like we were in a completely different city. It was magical.
I don’t feel bad about not doing anything super wild because at the time, we were content with each other. Plus, after all the places we’ve been, we totally made up for it. We were able to visit Atlanta and Destin while we lived in Alabama, San Antonio and Big Bend National Park while we lived in Texas, Disneyland, Santa Barbara, and San Francisco while we lived in California, and we’ve been to Vail and we make frequent trips to Denver now that we are in Colorado. We were even able to go on a Caribbean cruise last February! So fun. But one of my favorite vacations to this day, was our trip to Hawaii. It wasn’t really an ordinary trip though. We stopped at Travis Air Force Base while we were moving from California to Colorado and were able to fly with the Air Force to Hawaii for free. Yes. For free. We flew on a KC-10, which is a military airplane used mainly for refueling other planes while in the air. It was dang awesome. There were only about 10 of us, plus around another 10 Air Force officers, so things were pretty tight knit. I’ve never felt so safe on a plane before. {Which is saying something because I hate flying.} My favorite moment, was waking up from a nap and the smell of chocolate chip cookies filling my nose, only to see a Major pulling a hot batch out of the oven. You don’t see that every day!
Anyway, while we were in Hawaii, we went to the Aloha Stadium Swap Meet, which is just fancy words for a place that sells a lot of junk to sucker tourists. We were suckers in some aspects, but we did manage to get away with some fresh coconut peanut butter that was made right there on the island! And geez, let me tell you – that stuff was the bomb. I think it was mostly eaten before we even got home. I had no idea that coconut paired so well with peanut butter! And that’s the story of how this yummy granola was born. 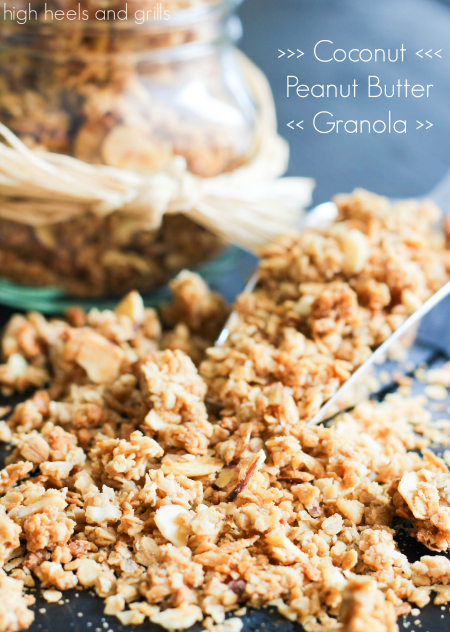 Your information will *never* be shared or sold to a 3rd party.
989 shares