Welcome to another Man Monday.

So, I’ve mentioned this before, but I’ll explain again.  Sarah hates pork… bacon, ham, pork-sausage, little smokies, and pretty much anything else American.  *Zach whispers* Secretly I think she likes it, she just wants to hate something.  Well, it’s my eternal quest in life to get her to like it before my grave finds me first.

I’ve resorted to disguises.  Have you guys ever seen that spider that disguises itself as poop to keep predators from eating it?  If you haven’t, go look it up.  Well, my quest is kinda like that, except not at all… in fact it’s probably the opposite and actually has nothing to do with it.  I disguise pork in my food, so as to surreptitiously infiltrate Sarah’s defenses.  Bait and hook.  She eats it, says she loves it, and I triumphantly exclaim that THERE WAS PORK IN IT ALL ALONG!  Slowly, this subterfuge will eat away at Sarah’s armaments and eventually she will be screaming for honey glazed ham on Christmas.  You guys just wait. 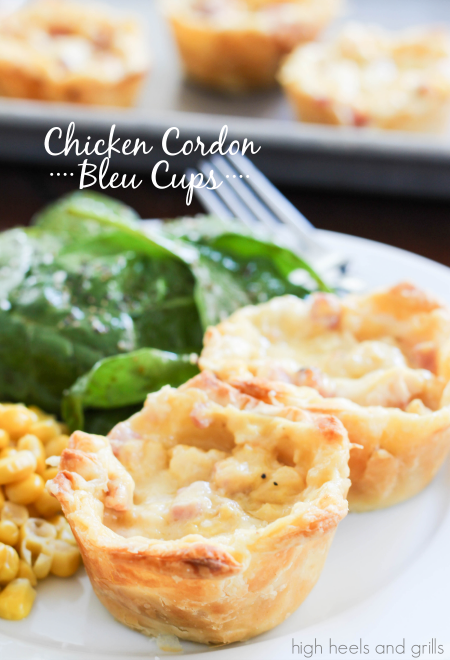 I hope you guys love this recipe.  It’s completely original by the way.  Chicken Cordon Bleu, in cups?! Fantastic!  Of course, it will probably do awesome (said really cocky-like) and in a few weeks you’ll see a bunch of other copycats all over Pinterest.  Just know, you saw it here FIRST! *Zach curses under his breath saying something about 8 Can Taco Soup…*
-Zach
Facebook | Pinterest | Twitter | Contact

Your information will *never* be shared or sold to a 3rd party.
2997 shares