This Banana Pudding Trifle has layers of pudding, homemade whipped cream, pound cake, and vanilla wafers. Everyone loves it at get-togethers and it has even been the highest auctioned dessert and multiple dessert auctions! 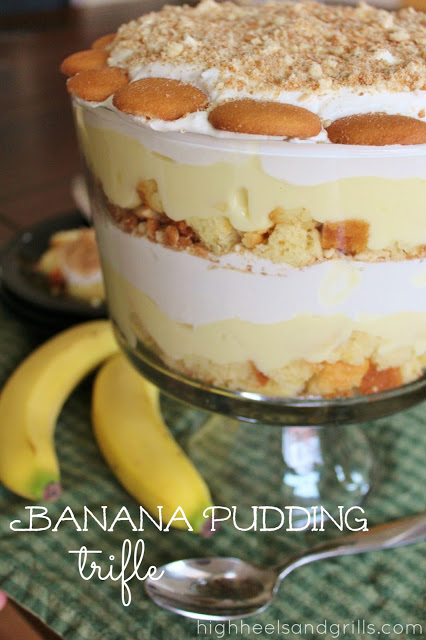 Okay guys. I am seriously beyond-words-excited to share this Banana Pudding Trifle recipe with you today. For a few reasons actually: 1 – It’s just plain delicious. I even made myself a mini trifle while I was putting it together, so I could taste it in all of its glory, without having to mess up the look of it. So good. 2 – This is a winning dessert. What does that mean, you say? Well, let me tell you.

A few days ago, we had a fundraiser at our church and one of the ways we raised money was to have a dessert auction. I wasn’t planning on going all week, but then at the last minute, my schedule opened up and I was able to go. I knew I needed to make a dessert, but since I’d be working all day, I also knew it needed to be a fast one. SO I made this delicious, yummy, best-dessert-ever banana trifle. As the desserts started getting auctioned off, I got a little bit nervous. I don’t know what it is about making food for other people, but nothing makes me feel more vulnerable. I always worry about whether or not they’ll like it as much as I do or what if I just have weird taste buds and everything tastes different to everyone else, etc. Well, the first dessert was a beautiful looking chocolate cake. It went to someone with the highest bid of $25. I thought, “Wow, that’s impressive. Wouldn’t it be so cool if my trifle went for that much?” {I really just didn’t want to be the loser that brought a $3 dessert, ya know?} There were a few more for $8 here, $30 there and then it came time for this Banana Pudding Trifle to go. I’m pretty sure I started blushing the moment they held it up. {I blush at everything. No biggie.} It started off at around $15 or $20 and somebody made a bid. I told Zachary that at that point, it could end and I would be perfectly content! Then more people kept bidding on it. Then again. And again. Before I knew it, it was up to 40 bucks! By this time, my face was red and I had that sweaty palm feeling as more and more people were told that I was the one who made it. After one final round of a few different people duking it out, this delightful goodness ended up selling for 59 WHOLE DOLLARS!! I could hardly believe it. I’m proud to say that it was the highest bidded dessert there and if I’m being completely honest – it’s probably worth $59 too. It’s that good.
Like I mentioned, this Banana Pudding Trifle is super quick to make. As in like 30 minutes quick. It also doesn’t require any cooking or baking. It’d be easy to take to a party or a get together or sorts without having to spend all day long in the kitchen. Those are the best kinds of desserts, in my opinion.
Ingredients:
Directions:
Enjoy folks!

Your information will *never* be shared or sold to a 3rd party.
81357 shares